Similar to that of the electronic data interchange implemented in the 70’s which sought to replace the outdated “paper contract,” blockchain intends to do the same—but to a greater scale and of more technological sophistication with “smart contracts.” Although the future implications surrounding blockchain are of great potential, developmental challenges still exist. In an exclusive interview, Dr. Steve Kursh, an IMS elite expert, professor, and consultant in the technology industry, states:

“What we’re seeing here is this tremendous potential of how we’re going to be using these technologies to run our organizations more efficiently to provide better services for our clients and customers… The reality is that it’s a lot harder to do than what people advocate. Perfect example is smart contracts, in which when you think about how it works and how it is designed— some people say, ‘Oh, it’s so easy. It’s great, a great way to save money.’ Quite frankly, it’s a great way to disintermediate lawyers in some manners. And, the reality is that using these applications is a lot more complicated.”

Smart contracts are not quite ready for full commercial adoption for intellectual property application. The technology is still under development. In fact, some have claimed an ability to hack into smart contracts. Even though blockchain is said to be a secure system, when smart contracts are embedded, the code integrity is weakened. This could potentially leave organizations vulnerable to security breaches.

These flaws are being investigated by developers, and further work is underway to correct the integration issues. However, some errors are undetectable— until seen in action. As in any area of innovation, the internet faced many of the same challenges with a constant need to evolve and better the technology. 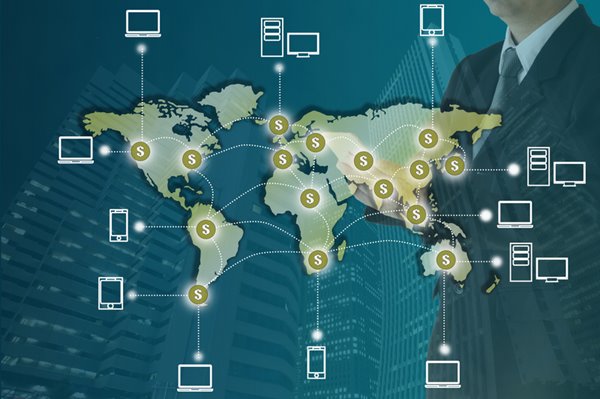 APRANET was the beginning of an internet revolution, sparking a wide array of communication networks from the World Wide Web to instant communication pathways. Traditional transactions, once done in person, moved into the digital realm. Now, a new internet is under development. Digital strategists refer to this development as “the second era of the internet.” Blockchain, the underlying technology of smart contracts and digital currencies like Bitcoin, made its first appearance in 2008 to serve as a solution to double-spending issues associated with digital currency.
“The New Internet,” blockchain, is said to have immutable security measures, compared to that of the internet now. Instead of the involvement of third parties, which can lead to security breaches or hacks, blockchain relies on a trust protocol. Additionally, the trust protocol is established through collaboration, cryptography, and clever coding. The result? Assets are securely protected. In terms of intellectual property assets such as trademarks, copyrights, and patents, a distributed ledger could be used to record IP rights, rather than a traditional database. This “smart IP registry” could have the ability to monitor the life- cycle of a right, its first application, trade use, the time in which the trademark or patent was licensed, and many more capabilities.

As disruptive technology arises with implications for commercial litigation and IP matters, IMS ExpertServices remains your source for the industry intelligence and expert services you need to stay positioned for the win.